Kenji Nagai: Business Growth of IT Organizations in Asia-Pacific today 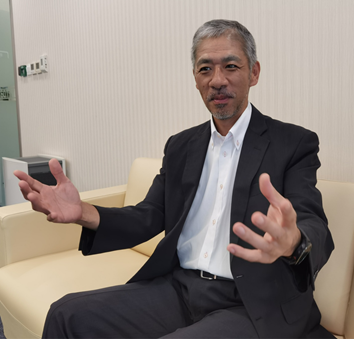 Kenji Nagai, Head of the China & APAC Sector and Senior Vice President of NTT DATA Corp., talks to Gernot Kapteina, Founder of OYSTEC, about management and business expansion of IT operations across Asia, and why especially China plays a leading role in this.

Kenji-san, it is great to have the opportunity to interview you. You were recently promoted to Head of China & APAC Sector. A big congratulations to you! Before we talk about this new Executive position of you in more detail, let us go back in time to the beginning of your career: What did you study at which university?

Nagai-san: Thank you for giving me such a great opportunity today, Gernot-san. I studied Urban Engineering at the University of Tokyo. My major was Water Infrastructure, especially the introduction of water purification technology through membrane separation. I wanted to become an Engineer who could build, improve, and support the infrastructures of our daily life. When I studied at the university around 1990, I came to believe that data communication and IT infrastructure would be the most important infrastructure in the near future, so I decided to join NTT DATA.

Nagai-san: It is true that some of our Executives come from the University of Tokyo. As I am very familiar with our hiring process and our hiring criteria, I want to say that we do not give preference to any particular university. I think it is simply the result.

Between your studies back then and your current position in NTT DATA Corp. today: which professional career stations in between would you like to mention to our readers?

Nagai-san: I joined NTT DATA right after graduating from university in 1990. Since then, I have been working at NTT DATA mainly for public sector customers in Japan. As an IT infrastructure engineer, I was involved in the development of large-scale public mission-critical systems. My turning point was when I was assigned to a project to implement a Japanese customs clearance system in Vietnam from 2012 to 2014. Today, I would like to tell readers also about that experience.

You are very welcome to explain that in detail. Also, when we were preparing the interview, you said that this stay in Hanoi, Vietnam had a strong impact on you. Why?

Nagai-san: This project was very difficult, but that is precisely why it was also so instructive for everyone involved. I would like to state the following in this regard: In general, the customs clearance regulations of individual countries in the world are not completely identical. Each country has introduced its own regulation based on its specifics and circumstances, so they cannot be adopted unchanged. They need to be fundamentally revised. The initial implementation was carried out with the support of the Japanese government, but the subsequent maintenance and operation were to be under the responsibility of Vietnam, so it was necessary to build the system in Vietnam from the beginning and train Vietnamese engineers instead of bringing it to Vietnam after building it in Japan.

Since the culture and business practices differ between Japan and Vietnam, it often happened that the Vietnamese could not understand the various points that we thought were best for them. The only way to resolve these difficulties was to communicate carefully with the Vietnamese, build mutual trust, and then proceed with the project. It took a long time, but in the middle of the project, when the Vietnamese said, "We believe what Nagai says. We leave it to you, please go ahead." I was overwhelmed with joy and relief. After that, the project went very smoothly.

Even today, Vietnam's customs clearance system contributes significantly to Vietnam's development as an important infrastructure in the country. My two-year experience in Vietnam was a great catalyst for my growth and has been invaluable.

Thank you for these impressive details. That was really a formative time for you. What I am now interested in is your experience with another Asian country which is China – an extremely aggressively growing country. Since you were and are responsible for it also in your current role, how do you see China's role now and in the future - firstly from the perspective of the global community and secondly from NTT DATA's perspective?

Nagai-san: Based on my experience in Vietnam, I prioritize careful communication and the resulting mutual trust in my activities with China. From a social perspective, I believe China has the following three advantages: First, China is a huge market that is believed to have the second largest GDP in the world and will be able to become the largest market by 2030, overtaking the United States. Second, China is a pioneer in digital technology and has a sense of speed. Third, you can dynamically drive your business in China with agile ideas of trial and error.

We at NTT DATA want to take advantage of this to add value to China and to NTT DATA as a whole from a global perspective: First, we want to expand our presence in China and further increase sales. Second, we want to realize the training of many engineers so that they can actively acquire the latest digital technology to use. Third, we want to use the offerings and human resources created in the Chinese market as an opportunity to actively support Japan and other regions, contributing to the growth of NTT DATA as a whole. I would like to make sure that this is realized.

Your current role since May 2021 in NTT DATA Corp. is Senior Vice President (SVP) and Head of China & APAC Sector. Beyond that, you are Chair of the Board of several NTT DATA companies in this region. How would you describe your area of responsibility and what are your goals for the coming years?

Nagai-san: My current role can be segmented into two areas: My primary role is to drive NTT DATA's China business as Head of the China region. My other role is then to supervise Asia as a whole as Head of APAC and China Region. Currently, I am based in Beijing. In terms of the China business, we are working to achieve RMB 2.4 billion in revenue by 2025, which would be 1.4 times the current figure.

As the Head of the China and APAC region, it is also my big goal to make our region's business even more visible to the outside world by becoming the business segment that generates more than 100 billion Japanese yen in a year. This is because under Japanese law, we do not have to disclose the individual figures of the business segments that generate less than 100 billion yen.

Besides the important work, what is important to you in your private life?

Nagai-san: In my private life, I focus on scouting. I myself never joined the Boy Scouts as a child, but after my three children joined, I fell for their fascination and naturally started to support their activities. After more than 10 years of experience, I am now the leader of the local scout group.

Now that I live in Beijing, I participate in the scouting activities from afar. Thanks to the influence of Covid-19, remote work has become mainstream nowadays, so we can participate in remote scouting activities without being inconvenienced. Unfortunately, the outdoor activities themselves cannot be done together. The greatest benefit of Scouting is that children can work together across the ages, care for the younger ones, respect the older ones, learn the importance of working as a team, and socialize naturally. In many countries around the world, the birth rate is declining and small families are becoming more important. I think that without these kinds of activities, it is difficult for both local communities and schools to teach children this kind of sociability.

This is a very grateful way to support the society here as well. But that brings us to the last question of our interview: Where do you see yourself in 5 or 10 years?

Nagai-san: I think I will still be working in the next 10 years. I want to contribute to society and support ordinary people without losing sight of my original goal when I joined NTT DATA. I think it would be a very happy business life if I could create something that I could proudly relate to myself rather than the world. After I retire, I hope to live a leisurely life in nature. There are many beautiful places in Japan, but I would be happy if I could live a happy life with my wife even somewhere overseas.

Thank you very much for this interview, Kenji-san!

Copyright: The University of Tokyo, NTT DATA, and other company names and products mentioned are registered trademarks of the respective companies.

Etiquetas: Interview
This website uses cookies, which are necessary for the technical operation of the website and are always set. Other cookies, which increase the usability of this website, serve for direct advertising or simplify interaction with other websites and social networks, will only be used with your consent.
Decline Accept all Configure