Elon Musk on AI, mind-machine interfaces, life, and humankind as a multi-planetary species 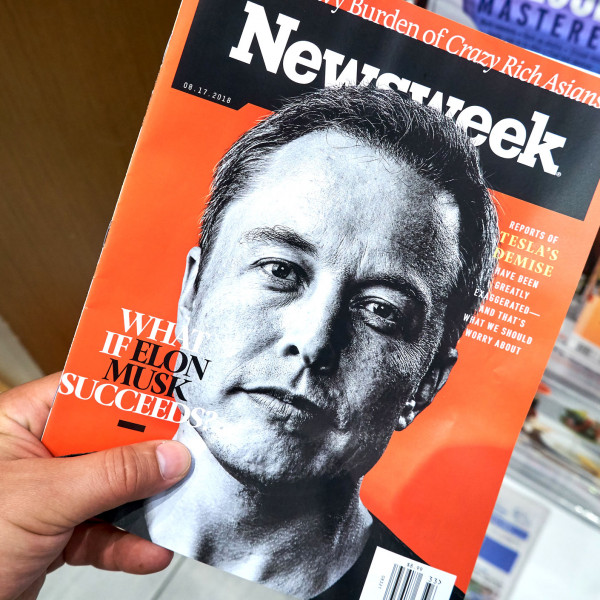 The following highlights are a summary of the statements by Elon Musk from a fascinating debate between him and Jack Ma at the World Artificial Intelligence Conference in Shanghai, China. These statements are more current than ever. Musk appeared very authentic and inspiring, articulating his views on AI, mind-machine interfaces, life, and humanity as a multi-planetary species.

AI: Humans are "dumb": Especially in the past, earliest civilizations were very primitive. There was basically no technology, only running around, trying not to get eaten. Now we have heaters, grow our own foods. We are way smarter than in the past. But we are not the last step in evolution. People underestimate the capabilities of AI: It will be vastly smarter than the smartest human can be. For example, any smartphone can beat the best human chess player these days. Humans are hopelessly inadequate. There is an ever-shrinking area where humans are still better than computers, and soon we will be far, far surpassed in every way. One can look at the progress of AI as solving problems with an increasing number of degrees of freedom. The thing with the most degrees of freedom is reality. AI is constantly evolving by solving things that have increasing degrees of freedom. As an example, consider games: Checkers has a low degree of freedom. Chess is still a game with low degrees of freedom. Then there is Go with already increasing degrees of freedom. We can see this as the progress of intelligence. AI will reach the point where it can fully simulate a human in every way, with many humans at the same time.

Neuralink/mind-machine interfaces: Can we keep up with the AI? If you can't beat them, join them. We need to create a high-bandwidth interface to the brain. In fact, we are already cyborgs: we are well connected to our phones and computers. The phone is an extension of ourselves. But the communication bandwidth to the phone is low. If we don't create a neural link connection, we will be left behind AI. We don't have much time. But in the future, if we are successful, we can upload things to our brain instantly to learn things within a very short time.

Humanity as bootloader for digital superintelligence: The pace of computer advancement is insane. A good example is video games: 40-50 years ago we had Pong, two rectangles with a square. Now we have realistic real-time simulations that millions of people play simultaneously. In the near future we will not be able to distinguish games from reality. There is much to suggest that we are already in a simulation. Civilization has probably been around for 7000 years. That's a tiny amount of time, considering that the universe is about 13.8 billion years old. Technological change is happening incredibly fast and is beyond our ability to even begin to understand it. It looks like humanity is a biological bootloader for a digital superintelligence.

Going to Mars: Currently, it is only a machine planet, as there are only robots there. The main purpose of going to Mars is to continue consciousness into the future and become a multiplanetary species. We should not assume that consciousness will continue because we have not yet encountered any aliens. To better understand the nature of the universe, we should become a multiplanetary species. Despite our best intentions to save Earth, there may even be an external force that prevents us from going beyond Earth; therefore, we should expand to Mars for as long as we can possibly make it. It is also the first time in Earth's 4.5 billion year history that it has been possible to expand life beyond Earth. How long will this window be open? We should try to do this as soon as possible. From a resource standpoint, about 1% of Earth's resources should be invested to get to Mars and become multi-planetary.

Jobs: In time, AI will make jobs obsolete. The last job might be writing AI software; then the AI will write its own software. The recommendation is to study engineering or work with other humans or to create art.

Education: The first thing is to try. Try to learn as much as possible that allows you do predict the future or to make the future. You can reduce the error on your future predictions. Create and predict the future. The current way of education is extremely slow. Traditional lectures are worst. We can solve this with Neuralink in future.

Life: Having too many people on the planet is an outdated view: the biggest problem the world will face in 20 years is population collapse. However, humans will solve environmental sustainability. We will take immediate action. If we can realize the Neuralink approach, age will not matter much anymore. You can simply save and restore your state, like a saved game. We are now on a clock basically. And it is fact that environmental factors are relatively minor for extending life. We can only solve biological aging if we really wanted to by making DNA changes where people will be reticent about that. On the other hand, we may well die at some point and maintain our human life cycle.

Copyright: All mentioned brand names (Neuralink, YouTube, Newsweek, others), website addresses and trademarks or logos, are the property of their respective owners.

Etiquetas: The Future
This website uses cookies, which are necessary for the technical operation of the website and are always set. Other cookies, which increase the usability of this website, serve for direct advertising or simplify interaction with other websites and social networks, will only be used with your consent.
Decline Accept all Configure